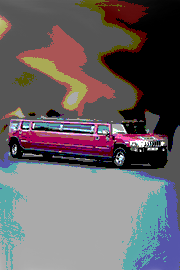 What's the deal with Limos!

You might imagine the limo is all about the length. But originally, we're talking about a horse drawn carriage, with the driver (chauffeur) outside in the elements and the (usually) wealthy occupants in the covered part of the carriage. It was about separation of status. It showed how wealthy you were.

Of course, now you can just call an Uber Limo.

At the beginning of the 20th century, the first motorized limos came about, and the driver STILL had to sit outside getting rained on. But they still weren't stretch limos...it was still all about the two compartments and status.

Given America's (USA's) obsession with size, it isn't that surprising that we took a French idea and made it...bigger. But it wasn't status this time...it was pragmatic! A company in Arkansas stretched a vehicle to accommodate bands and all of their equipment. The first two bands?  The Benny Goodman Orchestra and Glen Miller.

From there, they got bigger, and eventually with President Kennedy's 1961 Lincoln Continental, which was stretched 33 inches. But it was the 1980's and 1990's where things began to get ridiculous.

Speaking of status, Donald Trump gets to play a role here, as he is involved in at least two semi-famous limos. One in the 80's (never got past a few prototypes...but with Fax Machine and a VCR player!) and his presidential one nicknamed "The Beast" (which is essentially a James Bond car). Going briefly into the design world again...imagine the brainstorm session for a presidential limo!

Random!
Fridge with president's blood! And then of course, there's a back up limo and usually a whole convoy of protective vehicles.

And imagine the training the driver goes through! High speed evasive maneuvers in a 33 foot, 20,000 lb limo! Here's a good summary.

Limousine. (did you spell it right?)