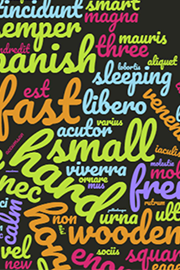 Quick, is “large purple duck “or “purple large duck”?  I bet you knew right away (assuming English is your first language).  How come?

Well, you probably can’t say…it probably just sounds funny to say purple first.   But really, it’s because size is supposed to come before color in adjective order.  What? Yes, there are rules.

While some of us never get a handle on fewer vs less (though many, again, can hear the difference), some are actually aware that it, too, is a rule.  But adjective order feels as mysterious as the subjunctive tense, and I studied Latin.  😊

Here’s a few more to try…you put them in order:

Loud, clock, white, alarm, small, annoying.  Did you get this one right?  You really have to be able to hear the wrongness.

You’d be hard pressed to point to WHY you know it is correct, but probably feel pretty strongly about a few of these!  The rules come naturally though what feels like intuition.  And perhaps intuition actually led to the rules being formed the way they are.

Amazingly, a rule exists, and it goes like this:

Before all of that is a determiner.  A, the, This, these…

I find some of the orders more obvious than others based on hearing it.  "Black leather shoes" vs "leather black shoes" (color and material). I find the number also pretty obvious most of the time: "Give me good three reasons why I should help you!"

I find the hard ones to be:

And there’s a reason some of them are harder.  A few, actually.  Not surprisingly, there is actually disagreement amongst the experts on some of the order.  Specifically, size after opinion, and shape before age.

But…why?  Great question!  I don’t know.  And maybe no one does.  But there a few theories (hypotheses!).  One suggests that the adjectives get more specific the closer you get to the noun. It kind of works, until it doesn’t.

Another suggests that the closer to the noun, the more innate the property.  The adjectives were describing things more intrinsic to the noun, or more permanent.  Thus, material is unlikely to change, while as the quality or number certainly could (hot metal, cold metal).  In fact, often the most intrinsic adjectives are likely to exist as nouns in a different context.  Again, materials are often nouns (cloth,rubber

And, it’s not actually true all the time.  A study showed it’s accurate about 78% of the time.  *1
As the 78% implies, there are certainly plenty of exceptions, and as is often the case, exceptions are interesting!
Long cold lonely winter. Big Bad Wolf (Mark Forsyth again).

A sentence might even have a different meaning if the adjectives are in the wrong order! And sometimes, breaking the rules helps create a desired emphasis.  Indicating your priorities, for example.  Now imagine English is your second language.  How would you teach this?  And can you imagine trying to apply it as you were speaking?  (try the French knife one again!) Speaking of rules, remember that “I before E except after C rule?”.  Obviously there are lots of exceptions…but check this out: according to Forsyth, there only 44 words that follow the rule, and 923 that don’t! (*3)   How’s that for a rule!? Speaking of spelling, that little rhyming phrase is a mnemonic (bet you thought had a 'u' in it!).

You can keep digging into this...it's amazing how crazy grammar can get!  Latin taught me to understand our amazing tenses like past perfect progressive ("had been eating"), but this dive took me into linguistics which goes at least a couple more levels into the crazy!
(example: Sing vs Sang vs Sung. The vowel/sound change is a type of apophony...but, wikiepedia hilariously lists the following as "also know as":
ablaut, (vowel) gradation, (vowel) mutation, alternation, internal modification, stem modification, stem alternation, replacive morphology, stem mutation, internal inflection, etc.