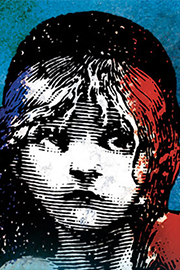 Why do we get obsessed with certain musicals?   At what point do we attach our own personal worth to it? This is a similar but hopefully less loaded topic to why people get so…”into” sports teams.

I’m obsessed with Les Miserables, which will be shortened (butchered) down to Les Miz for the rest of this post. I’m far from the only one.

Here’s my experience and thoughts, and then we’ll look at what psychology tells us.

I grew up listening to 4 things on road trips. CATS, The Hitchhikers Guide to the Galaxy, the Beatles “blue” and “red” albums, and Les Miserables (the Broadway version thank you very much). While I’m sure I’d recognize all the Cats songs, I don’t think I’ve listened to any cats songs other than “Memories” since 1995.  And I never actually saw the show. Perhaps it’d be different if I’d seen it, but not from what I’ve heard.

FYI: Hitchhikers Guide is solid. Strongly recommend (I later read all the books, but I still hear the wonderful voices of the “book on tape” version that I grew up on when I read it. The five books in the "increasingly inaccurately named trilogy" are available as one book for about $10...do it! I would strongly recommend the audio version or book over the movie.

The Beatles, meanwhile, are worthy of multiple books. Not much to say except that they hit at least 5 out of the 7 theories above. My wife is confused as to why they are so popular, though she doesn't dislike their music. Fair enough. But...back to Les Miz.

Meanwhile, I’ve seen other musicals., but while I loved some of them (Book of Mormon, Hamilton), I didn’t get obsessed with them (at least not for more than a week or two)...though they were and are excellent.

As mentioned elsewhere on this blog, I read the entire unabridged version of Les Miz on my phone.  It was the first book I read on my phone.  It was about 7500 “pages”. The book (free on Kindle!), as one would expect, gave me MUCH more context and depth into the characters and their back stories. I don’t think I actually knew that Eponine was the Thernardier's daughter.

I believe all of my theories are true for Les Miz, which is why it continues to be so successful and mainstream. I mean, it was written in 1862 and truly launched in the theater in 1985. That's a LONG time to be dominating! And don't talk to me about Shakespeare, that's a whole other weirdness. I think it is also: not cheesy, has great and memorable characters, is emotional, and let's be clear...has a high percentage of excellent music.