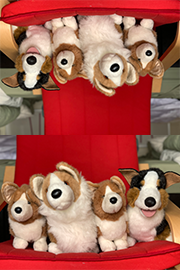 Let's get it out of the way now...I don't have a real living Corgi (at the moment).

Corgwn (the correct plural form of Corgi) are much more popular in the hipster world in the USA than they had been previously. Let's not forget the queen has had Corgwn for a long time.

What's the deal with Corgwn?

For starters, they are Welsh dogs. How many other Welsh things do you know?  (Leeks, sheep, love spoons (?), Guiness...?, they DO have a dragon on their flag!)

From Corgi Con to the Corgi Flop, corgywn have won over the hearts of more than just obsessed fans like me. Speaking of portamanteaus, the queen also had Dorgis. Yes, that is a Corgi-Dachshund cross.

The royal family's first Corgie was renamed from Rozavel Golden Eagle to...Dookie (1933). In 1944, when she was 18, then Princess Elizabeth was given her own, named Susan. At least 14 generations of Corgwn or Dorgis were bread from Susan, unfortunately ending with the passing of Willow in 2018.

Amazingly, they are herding dogs. They are cute. Intelligent. Loyal. Cute.

I do, however, have a remarkable collection of non-living corgwn in my house. At least 5 stuffies, an entire calendar worth of close ups pinned to the wall, pins, figurines, Christmas tree ornaments, and more. If I were to get one, it would be not very realistic but fun Squishy, or a more reasonable sized and shaped Douglass one.

Growing up, I had a real Corgi named Rex. A tri-color. The runt of the litter (all the other ones ended up dying, and he was in an incubator). He was just a teeny bit less hot doggy than the usual Corgi, and unbelievable awesome. We now have a paper mache and wood tri-color stool in our house.